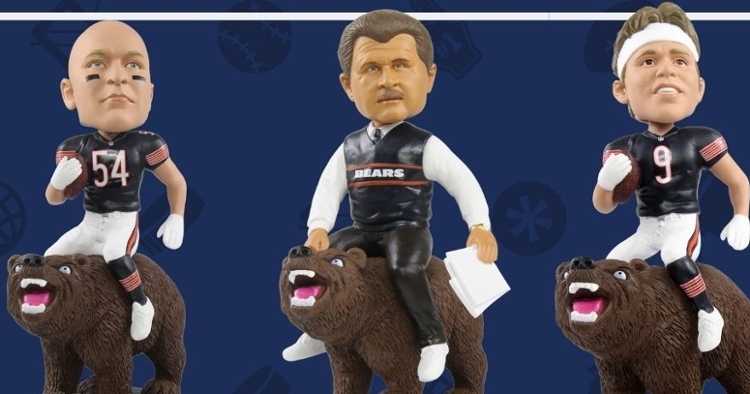 Here is 3 of the 6 new bobbleheads released today

The Walter Payton diving bobblehead is individually numbered to 1,985 – the season the Bears defeated the New England Patriots in Super Bowl XX – and they are available exclusively through the National Bobblehead Hall of Fame and Museum’s Online Store. The riding bobbleheads are individually numbered to 2,020 to mark the 35th anniversary of the 1985 Super Bowl title. All six bobbleheads are $40 each plus a flat-rate shipping charge of $8 per order. The bobbleheads just arrived and ship now except for the Mike Ditka coach version, which is scheduled to arrive in February, and the Walter Payton riding bobblehead, which is scheduled to arrive in May.

The Payton bobblehead is extended from the base and wearing a navy-blue jersey while cradling the football as he flies through the air in between two pylons that bobble and over the goal line. The circular turf-textured base includes Payton’s name and the bobblehead features a removable helmet. A long jumper in high school in Columbia, Mississippi, Payton revolutionized the end-zone leap for touchdowns. He trained for his signature goal-line dives over defenders by leaping over hay bales in the off-season.

Nicknamed “Sweetness,” Payton played running back for the Bears for 13 seasons after being selected in the first round out of Jackson State in the 1975 NFL Draft. He finished his NFL career with 16,726 rushing yards and 110 touchdowns – both league records – to go along with 4,538 receiving yards and 15 receiving touchdowns. Named the MVP in 1977, Payton was a nine-time Pro Bowl pick and seven-time first-team All-Pro. He was named to the NFL’s 75th and 100th Anniversary All-Time Teams. Payton’s No. 34 was retired by the Bears during the 1988 season. He was inducted into the Pro Football Hall of Fame in 1993 and the College Football Hall of Fame in 1996. Payton died in November of 1999 at the age of 45 after battling a rare liver disease.

The Coach Ditka riding bobblehead features the Bears legend wearing his patented Bears sweater vest with dark pants while sitting atop an equally menacing grizzly bear that is flashing its teeth. Posed in a similar fashion, the McMahon, Payton, Urlacher and Ditka player bobbleheads are all wearing the classic navy-blue jersey and sporting their familiar No. 9, No. 34, No. 54, and No. 89 respectively. The base of each bobblehead features the Bears’ logo.

Ditka, known as “Iron Mike” and “Da Coach” to most fans, is one of only two people to win a Super Bowl title as a player, assistant coach, and head coach. He is a member of the College Football Hall of Fame and the Pro Football Hall of Fame. Ditka, a five-time All-Pro tight end, was named to the NFL’s 50th, 75th and 100th Anniversary All-Time Teams. An NFL champion as a player with the 1963 Bears, Ditka coached the Bears to victory in Super Bowl XX, defeating the New England Patriots by the score of 46-10 on January 26, 1986, at the Louisiana Superdome in New Orleans. He coached the Bears for 11 seasons (1982-92) and compiled a regular season record of 106-62 with six NFC Central Division titles.

McMahon spent the first seven of his 15 professional seasons in Chicago and quarterbacked the Bears to victory in Super Bowl XX. A two-time All-American at BYU, McMahon was selected by the Bears in the first round (fifth overall) of the 1982 NFL Draft and still holds at least 15 franchise records.

Urlacher spent his entire 13-year career with the Bears after being selected in the first round (ninth overall) out of New Mexico in the 2000 NFL Draft. One of the game’s most productive linebackers, Urlacher collected 1,353 tackles, 41.5 sacks and 22 interceptions in his career. An eight-time Pro Bowl selection and four-time first-team All-Pro, Urlacher was inducted into the Pro Football Hall of Fame in his first year of eligibility in 2018.

"We are excited to release this unique bobblehead of the great Walter Payton performing his signature dive into the end zone on the anniversary of the Bears Super Bowl title,” National Bobblehead Hall of Fame and Museum co-founder and CEO Phil Sklar said. “In addition, the riding bobbleheads have become fan favorites and we know fans will be happy to see more Bears legends added to the series.”